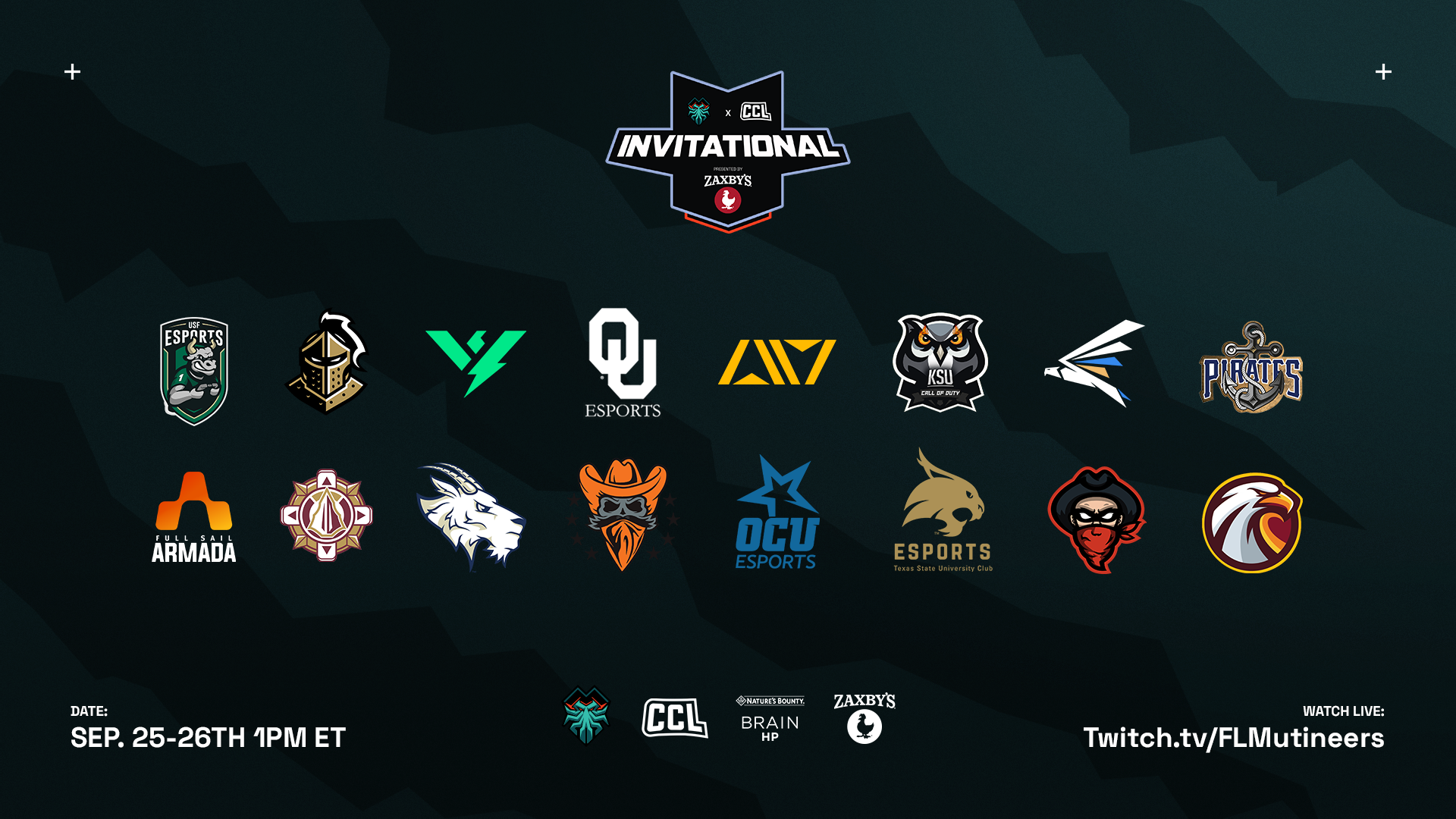 A LOOK INTO THE MUTINEERS X CCL INVITATIONAL PRESENTED BY ZAXBY'S

It’s September and the Cold War competition is still upon us. Thanks to Zaxby’s, the Florida Mutineers, Nature’s Bounty Brain HP, College CoD (CCL) and eFuse, we have ourselves one last collegiate showdown in Call of Duty: Black Ops Cold War. It’s been a great collegiate Call of Duty season with more tournaments and leagues than we’ve ever seen before. So grab you some Zaxby’s Chicken Fingerz, the new Southwest Zalad or my personal favorite, the Zaxby’s Spicy Signature Sandwich (regular if you can’t handle the heat) and let’s talk about some of the teams to look out for in this upcoming Invitational.

Favorite to win it all: Ottawa University (Black)

Surprise, right? I like to think of the Ottawa Braves as the “Alabama” of the collegiate Call of Duty world. They’ve dominated the scene (both their Black and Gold teams) since entering the scene last year. In this invitational, we’ll see the star-studded roster of Cruelty, Noysii, Fame and Lightning -- names you’ve seen plenty of in the Challengers and collegiate scenes. Their only loss the entire year came in the grand finals of the College CoD Playoffs to the school’s other team, Ottawa Gold, in a 3-1 series. They took home the title in the ABC x CCL Invitational 2021 back in May and also won the eFuse College CoD Summer Open 2021. They are an incredible respawn team. Any team facing them will need to have all 4 players firing on all cylinders to have a chance at taking a respawn map and potentially take it to a game 5, where they’ve shown the most vulnerability in Search & Destroy.

Expect this team in the grand finals.

The Hilltoppers have come onto the scene in recent months and have made an immediate impact. They’re 11-2 in recent official matches with the only two losses coming to Ottawa University Black (1-3, 0-3). They placed 2nd in the College CoD Summer Open 2021 and won the Stay Plugged In Beyond the Game Showcase over Oklahoma Christian University a couple weeks ago. They’re led by a LATAM superstar in Thresh, who’s placed T12 a couple times in the Challenger Cups, won a few LATAM tournaments and won the Esports Zone Sugar Land LAN in May. He’s accompanied by a menace in Eons, who’s a walking highlight reel, a Top 50 CCL player last season in Relck (with Navarro College) and a Search and Destroy star in Kruk, who captained the Virginia Commonwealth University Call of Duty team last season.

If all 4 players are on point at the same time, they could be the team to dethrone Ottawa University in the finals. They’ve already taken a map off them (a 6-5 search), played two Controls to the wire (both 2-3 losses) and were within 80 points in a couple Hardpoints. They’ll need to figure out a way to take a respawn map if they want a shot at the upset.

There’s no question that Texas State has been one of the most consistent teams in the CCL since entering in Modern Warfare 2019. The core 3 of Taktic, Drako and Scripts placed T16 in the College CoD Playoffs (2021), T8 in the ABC x CCL National Playoffs and T8 in the ABC x CCL Invitational 2021. However, they haven’t touched the game in a while! They’re also replacing VuzexRage, who posted some crazy numbers this past season, with Mataskaa. Mataskaa is a Texas A&M transfer who only played in a handful of a games during the Modern Warfare 2019 season and posted a 1.35 KD Overall, 1.37 in Respawns, 1.23 in HP, 1.20 in SnD, 1.48 in Domination and put up close to 24 kills a game. That is the year that Texas A&M Maroon went on to win the CCL Playoffs. However, he did not make an appearance in the CCL this past season during Cold War but, to my understanding, has been playing in the Challengers scene this year.

Taktic is one of the best leaders you’ll see in this space and if he can get his core guys and his new 4th to shake the rust off early and gel, you’ll see them on Sunday. They should be able to get some rust off and warm up vs. Kennesaw State University in the 1st round for a win that’d likely send them to face off against Ottawa University Black in the 2nd round where I’d expect them to lose. If Mataskaa can produce, they can likely make a stellar loser’s bracket run.

This is the school no one has really heard of just yet. They’re a new team about to compete in their first collegiate tournament together. New, however, does not mean bad. This team is led by Bighead, a great player who had multiple T32+ placings in the Challenger Cups and a T24 finish in the Challengers Finals. The rest of the roster forms out with Jzurk, Alessio and Meta. Jzurk and Bighead are a dynamic duo with great chemistry, Alessio is another top LATAM player from Puerto Rico ready to prove himself and Meta another solid player who’s had a couple T64 finishes in the Challenger Cups this year.

They will initially face a scrappy Florida Gulf Coast University team in what may be the best matchup of the first round. If they can get through them (which I anticipate they do in a close one), they should have an easier 2nd round match to send them to the quarterfinals against St. Edward’s University Blue. Watch out for this team in this tournament, the NACE Fall Varsity League and the upcoming CCL season.

I put Oklahoma Christian University in honorable mention because of their starting roster choice. It appears they’ll be playing a couple substitutes to test them out this tournament but do have two of their usual starters on the bench, Wisdom and Fastballa, to use at their disposal. I’ll be interested to see how the “new guys”, Kato and Dayz, stack up against the competition. If this roster sticks for the first round matchup against Ottawa University Black, it’ll be a good test to check the level of skill they bring to the table. If they opt to play Wisdom and Fastballa, at least for the first round, then it could be a great matchup as these two faced off once before where the Braves took the series 3-1 over the Eagles. Making Oklahoma Christian one of the few teams to take any map off the powerhouse Braves.

Georgia Southern University is a team that has been a consistent T5 team since the inception of the CCL a few years ago. They’ve always managed to show up and produce solid results year in and year out. They’ve added Lebanon Valley College transfer, Choppaz, who’s been a solid addition to the team. Then we have the usual faces of Tee, Apoc and Teston who have all proven themselves in any collegiate tournament or league they play in as top players in the space. They face Texas Tech in the first round which they should get by relatively easily and then would face the winner of Oklahoma State vs. Oklahoma where I believe they’d beat either team easily as well to head to the quarterfinals. The key for these Eagles? Passion. If they bring the drive, watch out!