Hey all! We at CCL have been very quiet about the upcoming Spring 2022 Season. Behind the scenes, old and new staff have been rebuilding and redesigning almost everything about how CCL works as we develop what College CoD looks like for the next five years. We’ve given you a small taste of what eFuse has to offer collegiate via Summer and Fall events, and we’re excited to unveil the future of College CoD! Below you will find SEVEN major updates to the CCL 2022 Season.

One of the biggest updates to College CoD is a Year-Round Schedule! The Spring semester will continue to (roughly) be the January-May Regular Season that you all know and love. Once the season has ended, we launch straight into the Off-Season of May-August focused on community events like 8s and Alumni tournaments. As students return to campus and teams begin to practice and plan for the Spring Season, we begin the Pre-Season of September-December. The Pre-Season will be focused on weekend competitive events to give teams a chance to try out new players and get warmed up for the Spring when the next Call of Duty title launches. 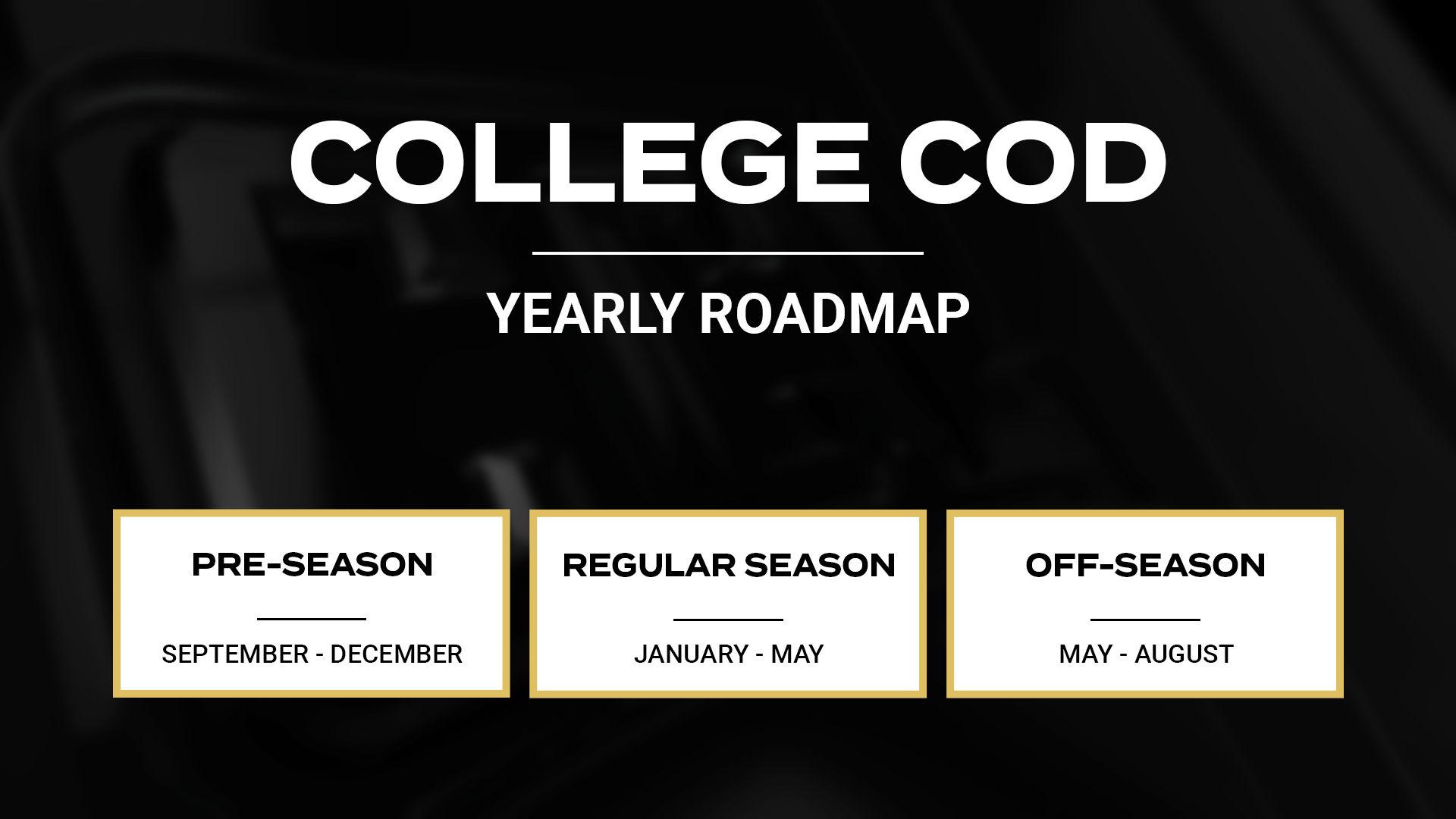 Registration officially launches November 16th! To kick off registration, we will be releasing a second article with more information about the registration process and the eFuse platform. Registration will close on January 6th, so make sure to sign up as soon as possible!

Below is a brief overview of important dates to know about the future. We’ll be releasing another article shortly that dives into this schedule, an explanation of “stages”, and the season format.

What is the Main and Academy League

If this new format is confusing to read, don’t worry. We will be releasing a full article and format breakdown video dedicated to Academy that fully explains every detail of how this works. We’re extremely excited to launch this new feature and can’t wait to see how teams put it to use to develop rosters and talent!

One of our goals working alongside eFuse and CCA is to standardize what it means to have a Varsity program at a school, and how that status impacts participation in collegiate leagues. Over the next two months leading up to the Regular Season, we will be rolling out a Varsity Status application and approval process. Upon being approved, Varsity teams will receive non-competitive benefits for their team and their school. Our goal is to work with Varsity teams to provide benefits that make their logistics, broadcast, and content easier and better than ever before because of their investment in their teams, their students, and in our league. This Varsity status will not impact the competitive format as Varsity schools will continue to compete in Main and Academy alongside club teams. More information about this program will be released as we roll out the applications.

For any club that is working towards Varsity status at their school, CCL staff are more than happy to meet with student leaders and help you brainstorm how to achieve your goals!

As students are planning Spring class schedules, keep in mind that match times and CCL broadcasts will continue to be Monday and Tuesday evenings for both Alpha/Bravo and Main/Academy. Specific match times for each region will be released on Syllabus Day, Jan 10th once registration has been completed, and we determine which teams are in which regions.

A new year means a new chance to improve the Top 25 process. Similar to last year, College CoD will release the “Official Top 25 Rankings” across Twitter and Discord.

Once again, this year’s top 25 process will be influenced by invited individuals and media entities across the collegiate Call of Duty space. However, the continued growth of the space offers a chance to include coaches and alumni in some way. Nothing concrete for these respective groups exists as of current. As this continues to be mapped out, respective interest and suggestions from coaches/alumni are welcome at this time. Additionally, if you are a media outlet looking to make content around College CoD in some way, feel free to reach out. Inquiries about both topics can be directed to CCL | Marco within the CCL Discord.